We shouldn't mock the Donkeys, Bob. After all, John Elway is a thousand times better than having Montgomery Burns run your operations. 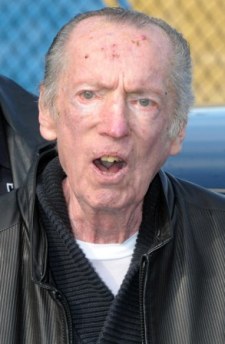 Davis May look like the Cryptkeeper, but lest anyone forget, his team STILL shellacked the Broncos twice this year: 59-14 at Invesco ring a bell?

As for the Broncos themselves, they can continue to suck in 2011 and that's perfectly fine by me! GO RAIDERS!!!!

To which Gunnar replied:

Cheer away like a blinded lamb, Shu, but any serious fan knows that senile old fool made a big mistake today in letting Cable go.

And then Shu retorted:

This is what Cable had to say following The Raider win at KC:

"We are disappointed because we are not going to the playoffs, but at the same time we stuck to the goal and stuck to the plan as we have done every week, and we got our eighth win. I'm very happy about that."

Sounds to me like he's a bit too content to have the Raiders be an average team instead of a playoff team or a Super Bowl contender.

Cable had 3 years and finished with a record of 17-27 with the Raiders. He had his chance and Al Davis gave him enough time to produce results and he failed....and by the way, I am a Raider fan DESPITE Davis, not because of him.

And then Brandon Loomis chimed in with this:

Yeah Tom Cable finished with a horrible record except the year he wasn't forced to play Jamarcus Russell. Oh how about Darrius Heyward-Bey. Just to put those two Number one picks in perspectives here's a list of QB's and WR's taken after those by people smarter than Davis.

2009 WR Jeremy Maclin, Percy Harvin, Hakeem Nicks, Kenny Britt, Mike Wallace, Micheal Crabtree, Mohamed Massaqoai, Brandon Tate, Mike Thomas, Austin Collie
That is quite possibly one of the strongest drafts for receivers that there has been in a while and the Raiders took Bey as the first receiver off the board. A few of those are surprise successes this early but Maclin, Harvin, Nicks and Britt were no brainers.

Cable inherited a horrible team that could barely squeak out four wins a season and turned them into an 8-8 team.

How can you fire a coach that sweeps the division?

Andy Reid, beloved coach of my Philadelphia Eagles, hasn't done that in 12 years.

Can you Raiders fans enlighten the rest of us why you support this team????

Or is it a FOX News sort of thing....the Liberal Sports Press never gives Mr. Davis the positive coverage he deserves.

Inquiring minds want to know.
permalink
Top
+0
-0
supporter
Isn't "enlightened Raiders fan" an oxymoron? :ducking:
permalink
Top
+0
-0
Their colors match my truck? Beyond that, my mom and Daryl Lamonica were sweethearts in high school, a cousin coached Jim Plunkett in high school, and Ben Davidson once lifted me up over his shoulders as a boy. Still, the Fox News comparo stung a little, forcing me to reconsider...

I did like how they hammered the Broncos this year, though.

[This message has been edited by Joe Whalen (1/16/2011)]
permalink
Top
+0
-0
If the Chiefs can turn it around as fast as they did, there is no reason the Raiders can't do it too. Other than the dead guy that owns the team. That might be a problem. Somebody really should fess up and admit that Al actually died in 1997. Anybody seen "Weekend at Bernies"?
permalink
Top
+0
-0
supporter

How can you fire a coach that sweeps the division?

Because even though he swept the division, Cable STILL failed to get the Raiders into the playoffs, that's why!

There's a lot being said about Cable sweeping the AFC West and still getting canned. To those who go with that gripe, I counter with this: IF Cable can motivate the Raiders to sweep the Chargers and Chiefs, then why, WHY can't he motivate them to also beat the Titans, Cardinals, Texans, 49ers and the Dolphins? All 5 of these Raider opponents finished with LOSING records and all 5 beat the Raiders...and had the Raiders beaten ANY one of those losing teams, they'd have made the playoffs and Cable would still have a job, now wouldn't he?

A good coach motivates his team to play-up and win more games than they lose, and he gets them to win the games they should win more often than not. Cable had 3 years to get the job done - that's more time than many NFL coaches have gotten. He didn't get it done, so he's out. End of story.

It's been announced that Cable's replacement has been hired - Hue Jackson, their former O-Coordinator. We'll see how he does.

Can you Raiders fans enlighten the rest of us why you support this team????

Well, speaking for myself, it's because my family lived in Berkeley, CA, before I was born. My 2 older brothers were born there, in fact. That area is in Raider Nation so the fandom rubbed-off on me. That plus the team has won 3 Super Bowls...granted, that was long ago but, obviously, there was a time when they were doing something right.

As I've already said, I love the Raiders DESPITE Al Davis, not because of him.
permalink
Top
+0
-0
I am actually pretty sure that Al Davis is Emperor Palpatine... We just haven't seen him shoot lighting from his fingertips yet. Poor choice in firing Cable, and 4 out of the last 5 coaches have had financial disputes with Davis over him paying up on there "guaranteed" contracts. Sounds like "Emperor" business ethics to me.
permalink
Top
+0
-0
supporter

Well, speaking for myself, it's because my family lived in Berkeley, CA, before I was born. My 2 older brothers were born there, in fact. That area is in Raider Nation so the fandom rubbed-off on me. That plus the team has won 3 Super Bowls...granted, that was long ago but, obviously, there was a time when they were doing something right.

As I've already said, I love the Raiders DESPITE Al Davis, not because of him.

Sounds like you're rooting for the laundry. Which is fine, as far as that goes, but if the laundry isn't well managed, then you're going to be disappointed more often then not.

I mean, I HATE the Steelers, but they're a well run organization.
permalink
Top
+0
-0
As a life long Raiders fan, I will try to explain why I root for the silver black....

It was 1980. I was 7 years old. The raiders were in the Superbowl vs. the Philadelphia Eagles. My dad was from Philly and he was a true Eagles fan. In fact, I think he became member of the Eagles (F.O.E.) due in part ot the name. So, he's psyched that the birds finally made it to the big dance. I am seven years old watching him and thinking, "wow, this is a big [email protected] deal!" Then, the day of the big game, he goes to the bar and watches the game with his friends. Me??? I watch the game by myself in the living room as my mom plays cards with a few of her friends in the dining room.

As I watch, the Raiders look good. Silver and Black. Pirates! Bad asses...legends of crazy football type of stuff (so I was told). These guys are for real, and they beat the Eagles. I was excited. Go Raiders! My pops comes home disappointed after the game, and as I start talking about the Raiders, he turns to me and says, "if you are going to cheer for the Raiders, then you better cheer for them the rest of your life... because I don't want any [email protected] bandwagon fan for a son." I think I would've liked your Dad.

Maybe their guiding principle should not be, "Let's do it the way Al would have done it?"
permalink
Top
+0
-0
Post new topic Reply to topic
Online site to pay traffic ticket?
How the Electoral College Works