Remember this place?
Mike Wallick
mrozla
MeiMei
Jay
Bill Freese
mrozla
Carol S
mrozla
dkohl
Nancy Drew
mrozla
David Schott
Jeff Denton
spacekace
Gunnar Emilsson
Gene Keller
Nancy Drew
Chuck Littleton
Jay
Mike Wallick
Jim B
Gene Keller
Jay
Amorette Allison
Nancy Drew
Jay Johnson
Tom Masa
Former
Gail
Post new topic Reply to topic
supporter
I was just heading down Main Street in Miles City on Google Earth streetview. I was passing by the building across the street to the north (towards the bridge on Main) from the Olive Hotel and I see it's all boarded up now. I was remembering that for a very short while in the 1970's someone opened up an indoor miniature golf course there. I played it once with Ron Richards. Anyone remember that? Any other places come to mind that were short stops along the way?
permalink
Top
+0
-0
SPONSORED
When my family moved to Miles City in December 1957 it was the studio for the local independent TV station, MCTV. Although I was only 7 years old, I remember that quite well because my grandparents had just purchased the Olive Hotel earlier that year. My family and my uncle's family, who had also just moved to MC, lived at the hotel for a few months until we could find more suitable housing. My cousins and I would sit in the lobby after school watching MCTV's Jet Jackson and other memorable shows that I can no longer remember, all the time knowing that the source of this amazing stuff was right across the street! Anyhow, the advent of cable later put them out of business. Don't remember any other tenants after that.
permalink
Top
+0
-0
Yes, I used to work there. It was a fun miniature golf course. I enjoyed the few hours a week I was there.


I honestly do not remember the name of it or who the owners were but I know they were very nice to a young teenager working for them.
permalink
Top
+0
-0
Prior to being a TV station it was a Nash auto dealership.
Not sure about this, but I belive that later Packard cars were added.
permalink
Top
+0
-0
supporter

Source: http://nashparts.com/Deal...lersMN.htm
permalink
Top
+0
-0
You can see the storefront out the window in this photo from the Olive Hotel Lobby. The sign above the door is cut off, but the what's visible says "& Antiques". The photo info says it was taken 6/18/2002. 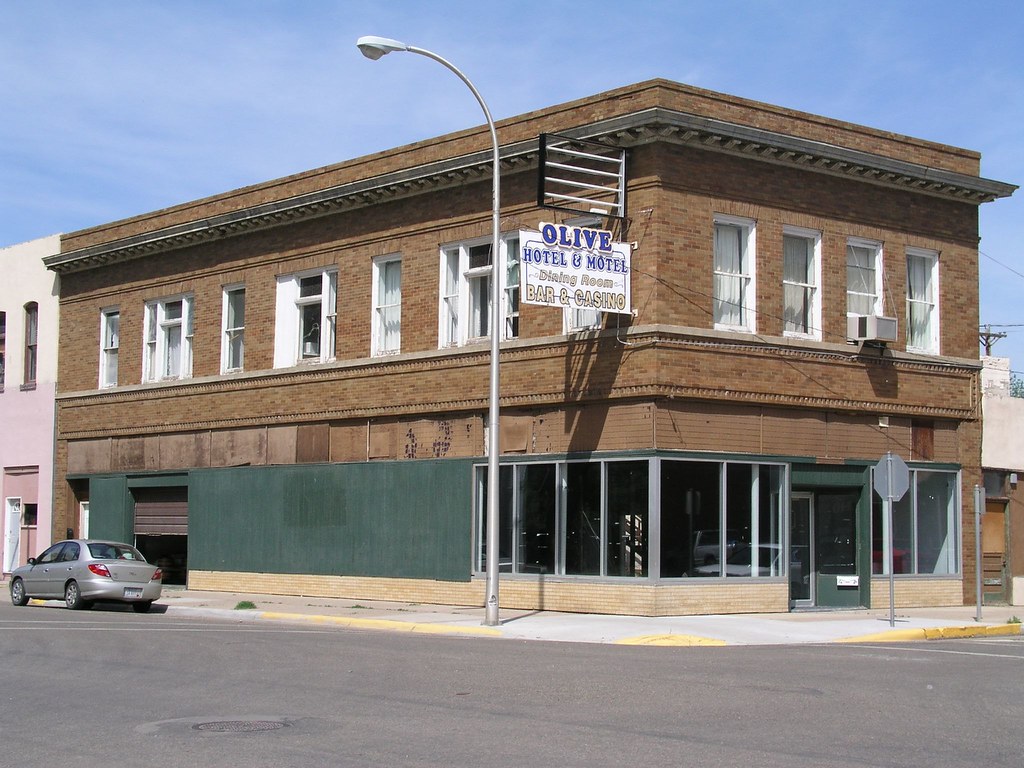 But we can't tear it down and make a parking lot! It's a MC landmark!

[This message has been edited by Jay (3/24/2011)]
permalink
Top
+0
-0
supporter
Teeter-totter marathon was in the Miles & Ulmer window. Donny Brown was one of the participants.
permalink
Top
+0
-0
Jeff Reid was the other
permalink
Top
+0
-0
Hey Jay, A&T was on the corner of Main because the Coke bottling plant was rite behind it on Main St. There was a Parts store where you said on Pleasant St. but that didn't go in until later on. Tom Faulkner worked there after he got out of the Service around 1960. I don't think I've lost it yet but pretty close. LOL
permalink
Top
+0
-0
Gene: I stand corrected. Now that I dig a little deeper.
I also remember the Coke Cola bottle plant. Judy Wiemers dad ran it. Went to school with Judy. When we were little brats, coming back from the polio pit, we used to stop and watch the bottle process and have one when Coke was the REAL thing.
That goes back a year or two.
permalink
Top
+0
-0
founder
supporter
The former Coke plant (which now has a big Pepsi sign on the side. The horror!) is the oldest brick building on Main Street. The building which started this thread was build by Miles & Ulmer in the early twentieth century. Like many buildings, it was beautiful once but was allowed to go downhill.
permalink
Top
+0
-0
supporter
Does anyone have a pic of the Coke bottling building being discussed?
permalink
Top
+0
-0
In the 40's and early 50's this building was occupied by Hines Motor Supply Co. My stepfather, Sherman Cobb was manager for a number of years before he went into the Army in the early 40's.
permalink
Top
+0
-0
founder
supporter
I seem to remember that the state liquor store was there possibly in the early 70's.
permalink
Top
+0
-0
That block is in really bad shape. I always remember something being there - the next thing I know, its a total eyesore. The entire SE corner of that block needs to be torn out. The motel (or whatever it is now) behind it as well. (No, not the Olive... the "studio apartments" or whatever churched up name the slumlord gave them!)

[This message has been edited by Former (6/9/2011)]
permalink
Top
+0
-0
SPONSORED
I have the Star picture and article of the teeter totter marathon in my scrapbook. Every article and picture of highschool students that was in the Star from my freshman year till I graduated I have in my scrapbook. I bring it to all my class reunions.
permalink
Top
+0
-0
Post new topic Reply to topic
Rape and kill the peasants
Art Work for sale.