Why just hula, when you can Hot Dog?
facebook.com
Food, Dining, Restaurants & Bars

and thanks cubby
permalink
Top
+0
-0
I talked to the store manager a few days ago at Wal-Mart, she said the 6th. I asked why not the 5th, and there were a few holdbacks. So it's looking like the 6th
permalink
Top
+0
-0
founder
supporter
You make your plans. You set your schedule. And the truck carrying some absolutely necessary piece of equipment breaks down 200 miles away. Or it turns out that the supplier sent the wrong something or other and you didn't realize it until the last minute. Or any number of little annoyances.

I always wait at least two weeks before trying a new restaurant so they can get the bugs out. I look forward to dining on potato cakes and Jamoca shakes at the end of the month.
permalink
Top
+0
-0
Yum--can't wait!!! Billings seems so far away just to go to Arbys and turn around and come back! LOL
permalink
Top
+0
-0
I'm guessing that a big part of it has to do with the fact that today, Arby's is giving away free Junior Deluxe Sandwiches with the purchase of a soda.

permalink
Top
+0
-0
supporter
Keefro, looks like that just ruined your whole day off LOL. Thank goodness you did not sit up camp there last night like you wanted too.
permalink
Top
+0
-0
moderator
founder
I think "jessiker" might be on to something.

permalink
Top
+0
-0
supporter
Im thinkin' Thai-style spatchcocked chicken that is marinading in a toasted coconut/garlic/shallot/lemongrass/fish sauce/peanut oil/thai red chile paste/coriander/cumin/black pepper paste in my refrigerator right now, that I will place on a hot grill in about 4 hours.

That's what I'm thinkin'.
permalink
Top
+0
-0
supporter
Really? There is THIS much excitement over an Arbys? A microbrewery I could understand, but Arbys?

OTOH, today I went and had lunch at the RB drive-in....OH YEAH! 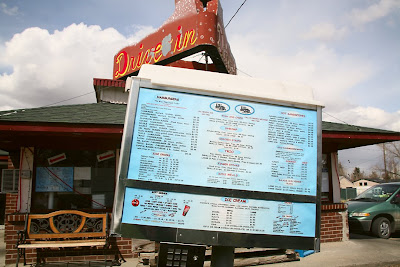 The normal-sized sandwich is mostly bun. You have to get a medium-sized to get what was once normal. The "Beef and Cheddar", well, they mostly push the el-cheapo version of it that sucks. Probably both suck.

I'm pretty much down on most of the fast food places, but hey, if you've got one -- at least you've got one. I'm still waiting for a Wendy's around here, but they've pretty much gone downhill as well.
permalink
Top
+0
-0
Just my opinion, but Wendy's around here SUCKS; especially if you go inside. For fast food, it's really slow and I think the employees move too slowly as well. We don't eat there anymore and haven't in about a year because every time we were there, it'd take 45 minutes before we'd be served, even when it was slow! Plus the foods not that great; I think the only thing really good are the chicken nuggets--they've got that over mickey d's, but this is just my opinion. And yes, we've complained to management and headquarters, but to no avail (except a free meal for one person in the household from headquarters).
permalink
Top
+0
-0
Arby's sucks. MC is turning into the fast food capital of the world. The researchers are doing their homework before they build these new fast food places, and they must all come to the same conclusion...MC eats a lot of crap. The market share for a town of 9,000 people must be phenomenal for another fast food joint to open up. I would suspect it won't be long and Burger King will be arriving next.
permalink
Top
+0
-0
supporter
MC will be the home of the first-ever fast food/Gambling joint. "Lucky's Squirrel Burger Emporium & Casino."

Of course by "casino" it'll be a single touch poker machine between the soda dispensers and garbage/tray return. It'll also be built next to a church.

Arby's - around here, it's pretty good. If I still lived in MC and had what little choices exist for moderately decent food I'd be thrilled, too. Dave is just asking to be taken down to the ground and force-fed a #3 value meal with horsey and Arby-Q sauce and a Sprite. GET HIM!

Wendy's - in Billings they were a little scary, as I recall, but it's been some time. Here in DSM, not bad.

Of course, nothing beats Danno's Bar & Grill on my deck so it's all relative.
permalink
Top
+0
-0
I think the name of the place was "the Hop" in Billings. They had a burger there called the "Whatzit" if I recall correctly. That was good fast food. Anybody remember that place, or was it called something else?

Fast food taco stands in Denver are usually good, but you take your chances. Every third or fourth one and there will be some dysentery.

I dunno, maybe's it's just me, but I think corporate fast food places are worthless.

permalink
Top
+0
-0
admin
moderator
founder
When I attended Eastern Montana College in Billings (EMC), I think it was Sandy's (sp?) Drive-Inn that occasionally offered 5 burgers for $1 (usually it was 4 for a buck). The burgers were about the quality of the el-cheapo ones at McDonald's, but for a kid with no money, that was an awesome deal. Walk in with a dollar bill -- walk out with a bag full of burgers.

Of course, money was hard to come by, so after digging around in the car for change -- a decision had to be made -- hmmm -- purchase a gallon and a half of gasoline, or walk to Albertsons and purchase a six pack of "Generic" beer for 99 cents (if you are as old as me you know the ones, the white cans that simply had BEER printed on them), or go to Sandy's (sp?) and grab a bag of burgers, or perhaps go to the Casino Club (which ironically, was not a casino) and get 10 cent well shots.

Ah, the decisions. Unfortunately, more often than not, gasoline for my Ford Mach I Mustang came in last -- you could always grab a ride.
permalink
Top
+0
-0
You guys are right the Whatzit burger was at the M&M. The Hop's andwich was maybe just called a "Hop Burger" and it was a 1/2lb ground burger cooked with oins and served on a grilled piece of flatbread with whatever else you wanted on it. By the time you were done putting ingredients on it...it ended up weighing something like 3 pounds. It was good.

What happened to the M&M? Collapse?
permalink
Top
+0
-0
moderator
founder
I think the M&M Whatzit burger may have included a fried egg or two. A cardiologist's dream.

The M&M's fixtures almost got auctioned off recently but I think that was stopped due to a dispute over who rightfully owns the place.
permalink
Top
+0
-0
supporter
The Whatzit, in its original incarnation, was simply a humumgous bacon cheeseburger served on whole wheat toast. Best served with gravy on the fries.
permalink
Top
+0
-0
Well I think we need a Chik-fil-a now!!! Yummy!!!
permalink
Top
+0
-0
supporter
This is only like the third or fourth time a new fast food place has opened in MC in my lifetime. When I was a kid it was just Dairy Queen, Taco Johns, Hardee's, and A&W. I remember it being a big deal when McDonald's came. I can't remember when A&W closed but it must have been before I was in High School. Subway opened somewhere around the time I got into high school. Then Wendy's opened while I was gone and Hardee's closed. KFC came and went while I was away as well, which is too bad since now the only option for chicken in MC is Chester Fried from the grocery store delis. It's not terrible but it's no KFC.

Anyway, I don't know why I posted that, but I don't really think we're being overrun with fast food places. Even assuming Arby's survives, that still only leaves McDonald's, Taco Johns, Wendy's, Subway, and Arby's (not counting the pizza places as "fast food" although they are chain restaurants). I don't think 5 fast food places is disproportionate for a town this size if you consider how much of the surrounding area Miles City serves as well. The casinos still outnumber them 3 to one.

As far as Arby's goes, I will probably go there once in a while, although I think that the beef and cheddar is the sandwich that least resembles the menu picture in all of fast food.

They need make sure there packets are not getting in the containers. That packet was in the Mozzie stick container, and I didn't even notice it until she was screaming

Still good food so far.
permalink
Top
+0
-0
When I was in school in MC in the sixties/seventies, I used to love going to the A&W and getting a Teen Burger (with bacon bits), fries and a large mug of A&W Root Beer...was always the best!
permalink
Top
+0
-0
founder
supporter
I think we need a LONG JOHN SILVERS joint! Living in Seattle for so many years, I miss my fish 'N chips!!! I know it wouldn't be the FRESH fish I knew, but at least I could PRETEND!
permalink
Top
+0
-0
supporter
I woould rename that sandwich from "beef and cheddar" to "processed meat product and cheez whiz".
permalink
Top
+0
-0
Ditto Gene. That is the best fish joint imo.

I have never heard anything good about Wendy's in MC. You have to do it right from the start or people won't partake. I think Wendy's shot itself in the foot and has never healed.

Apparently You haven't eaten chicken from the Tavern. It's the best.

You are correct. I haven't been in the Tavern since I was about 15 years old, and they didn't have food then. Maybe I'll have to go try the chicken.