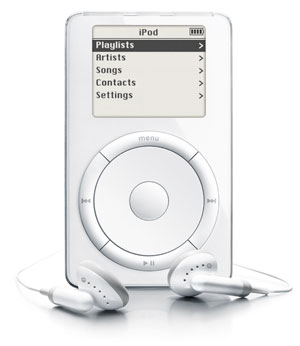 Wow, it's hard to believe the device that changed an entire industry is only 8 years old today.

I love this thread from MacRumors.com:

I love some of the comments in the thread:

Great just what the world needs, another freaking MP3 player

There are plenty of things that would help push Apple hardware sales. A better and much pricier MP3 player is definitely not one of them!

I wonder how some of these people feel now?

permalink
Top
+0
-0
Those look like Atari cartrages to me.

permalink
Top
+0
-0
What are Atari cartridges?

permalink
Top
+0
-0
I remember fondly the many roadtrips I took with my dad when I was a little kid. His old Ford pickup had a 8-track player in it and we'd listen to everything from the Star Wars soundtrack to the Beatles' Abbey Road to Merle Haggard to The Doobie Brothers. Good times, good times.
permalink
Top
+0
-0
supporter
My older sister's boyfriend's '69 Plymouth Barracuda - 383 hemi - Hurst 4 otf - metallic purple with a black vinyl roof - fat radials with a thin red sidewall stipe -- black bucket seats with tall backs -- 110 mph plus -- Sly and the Family Stone 'Wanna Take You Higher' playing full blast. Priceless.
permalink
Top
+0
-0
first of all... MG you have some good tunes in that box of 8-tracks. When I saw that all I could remember was my dad driving and having to "jiggle" the butter knife so C.C.R. could play !!!!Thanks for the GREAT memory to start my day!!!!
permalink
Top
+0
-0
Does your sister still have that car, Steve? Dayum!
permalink
Top
+0
-0
supporter
That was her boyfriend's car, Brian. He traded it off a few years later for '72 Corvette. My sister broke up with him about that time. They both traded down, imho.

My sister car was my dad's "old" (he never kept cars more than 2 years) '66 Bonneville convertible with a 426 cid V8 and 3-speed automatic. It didn't have an 8-track, but it did have an AM/FM radio with "wonderbar" and a rear seat speaker that you could turn on and off with a switch on the dashboard. That was true "hi-fi" and "high tech" back-in-the-day. Things were much simpler then. :heavysigh:
permalink
Top
+0
-0
I naturally assumed that she would have taken the car when they broke up, Steve. It would have been the logical thing to do, you know?
permalink
Top
+0
-0
supporter
Well Brian - things weren't nearly as civilized back then as they are now.

permalink
Top
+0
-0
supporter
Wow - I went strolling down memory lane and found these photos --
http://www.cars-on-line.com/41010.html
which look eerily like the Pontiac convertible that I referred to above. It's the same exact color (metallic gold) and even has the white vinyl seats, except ours had bucket seats instead of the full front bench. (Strange thing: the car didn't have a center console - just an empty gap between the seats with the transmission selector mounted on the steering wheel - that's the one thing I would change).

I wish there was a pic of the car with the top down - man, that car looked soooooo looooong when the top was down! And such swoopy-curvy lines. I swear, if Marilyn Monroe had been a car, this would have been it (well, it would have been had it had been outfitted with those big torpedo-shaped chrome bumper guards that were popular in the 50s).

One correction for car buffs: I guess the engine was a 421 cid V8. I could have sworn the air filter cover had red numbers on it that said 4-2-6, but I guess that just shows the kind of funny games that time can play on one's memory.

Kick-ass car.
permalink
Top
+0
-0
supporter
If that Barracuda had a 383 it wasn't a Hemi Steve-the only Hemis in those years were 426's.Lots of 340,383,and 440 powered mopars then but very few Hemis.
permalink
Top
+0
-0
supporter
Ken - I'm not sure about the displacement, but I know the Barracuda had "Hemi" on it - so it I guess it was the 426. Now that kind of makes sense since that is the size engine I thought was in the 66 Bonneville that my sister had at the same time. Both cars were my dream cars when I was 12 years old, so I guess it's possible that the details could get a little mixed up after 40 years. The cars I ended up having were nowhere near as cool.

It's cool that you know about those cars - do you have a classic car? If so, are you a member of the High Plains Classic Car Club? The classic car show they put on every year is one of the best I've ever seen.

[This message has been edited by Steve Craddock (10/24/2009)]
permalink
Top
+0
-0
SPONSORED
supporter
Anything Hemi powered in the musclecar era is worth a bunch these days.I liked the Mopars w/ 4 speeds w/ the Hurst pistol grip shifter handle.I never owned any Mopar or Ford musclecars,but I have through the years owned several first generation Camaros,several 66 and several 70 Novas,and one 68 Corvette.I have owned quite a lot of Chevelles-two 64's,five 66's,three 68's,3 70's and two 71's,mostly all SS big block models.I currently own several '69 Chevelle SS396 cars and a '70 El Camino-unfortunately all in project status.
Although I'm not a member of the car club,I've been a judge twice for the car show.I can definitely say that there are always a bunch of unbelievable vehicles there-judgin' ain't easy!
permalink
Top
+0
-0
Post new topic Reply to topic
I Miss The 1980's
Monty Python: Almost The Truth