And if I happen to go earlier than expected, I hope that someone on here will see to it that these three are played. Thanks 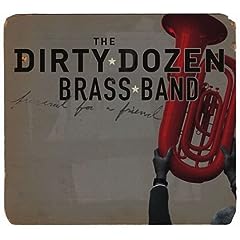 Since 1977, the Dirty Dozen has extended the New Orleans brass band tradition, adding a funk rhythm section and recording with alt-rockers from Elvis Costello to Modest Mouse. But the band has deep roots, and they've never been more apparent than on Funeral for a Friend, a performance that goes to the very core of jazz and New Orleans musical life. Dedicated to one of the band's founders, the late Anthony "Tuba Fats" Lacen, it's a jazz funeral with hymns played at stately dirge tempo en route to the cemetery, then pressed to festive up-tempo counterpoint on the return. The music here pulses with life--and with afterlife too--as the raw R&B force of tenor saxophonist Kevin Harris and baritone saxophonist Roger Lewis energizes traditional tunes like "Just a Closer Walk with Thee" and Blind Willie Johnson's "John the Revelator." On "I Shall Not Be Moved" and "Jesus on the Mainline," the band pushes outward to hypnotic, dense, incantatory jams. Funeral for a Friend is a summary of the Dirty Dozen's greatest strengths, a memorable CD filled with joy and sorrow and real emotional power.
permalink
Top
+0
-0
See You on the Other Side - Ozzy
permalink
Top
+0
-0
I am a funeral service student here in Gresham, Oregon!! I have thought of my funeral songs and those for my family members too!And have been doing so for years, as well as having in depth conversations with all of them about their wishes.

http://www.caring.com/sea...eral+songs
permalink
Top
+0
-0
SPONSORED
My grandma told me that she doesn't want any old song that is sad played at her funeral. I have to agree it is supposed to be a time of enjoyment (ok maybe not enjoyment couldn't think of the word I wanted. I agree with that. Play songs that relate to the person I think and of course this is just my personal opinion. :0
permalink
Top
+0
-0
Post new topic Reply to topic
Dirty Jobs in Miles City
The most disappointing candidate on earth IMO